Search through all of your and your teams Dropbox files.

Written by Pius Friesch
Updated over a week ago

The Dropbox connector lets you import and index all of your personal and your teams files. It can also import all permission and access management, so you everyone can only find what they are allowed to view. It also lets you synchronize changes of your teams Dropbox automatically.

This article will explain how to:

The Dropbox connector will automatically:

Step 1: Verify that you are logged in the correct team as admin by checking access to the Admin Console.

Step 2: Got to the Dropbox Developer Console and create a new app.

Step 3: Select Scoped access to your Full Dropbox and give it a descriptive name. Users will see the name of the app when they authorize access to their Dropbox. 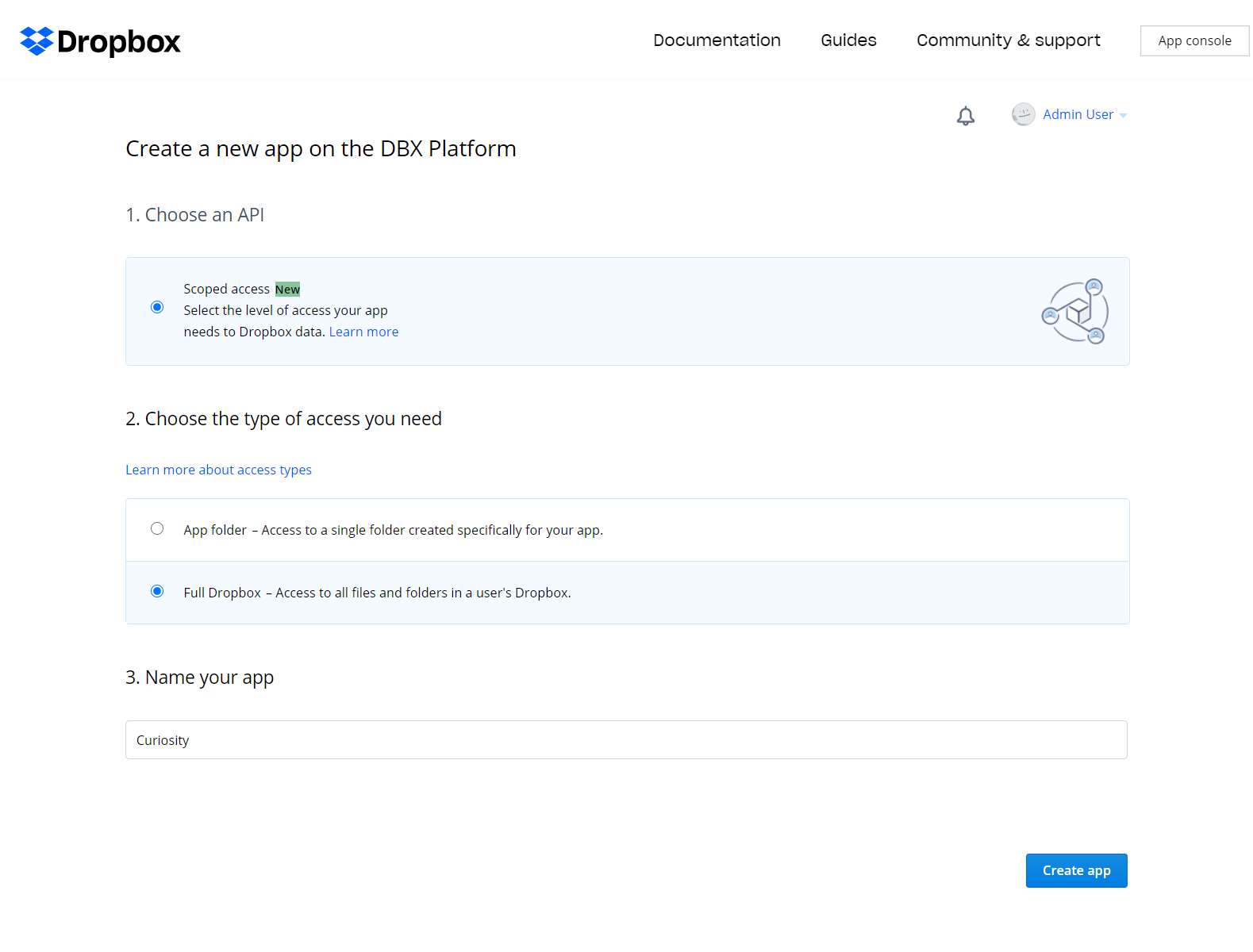 Step 4: You can keep the Dropbox app in Development status for now. However, Enable additional users to allow other people using the app. See the Dropbox developer guide how Develpoment and Production affect the number of users an app can have.

Step 5: Add allowed redirect URIs to allow authenticating users with Dropbox for your instance of Curiosity. The URI need to follow this exact pattern: <SERVER_URL>/api/oauth/dropbox/authorize

Curiosity is managing the authorized user certificates, which allows us to disallow public clients.

Step 6: Head over to Permissions to allow Curiosity to read files and sharing information from Dropbox. Select files.content.read and sharing.write permissions and press Submit to save the changed permissions. 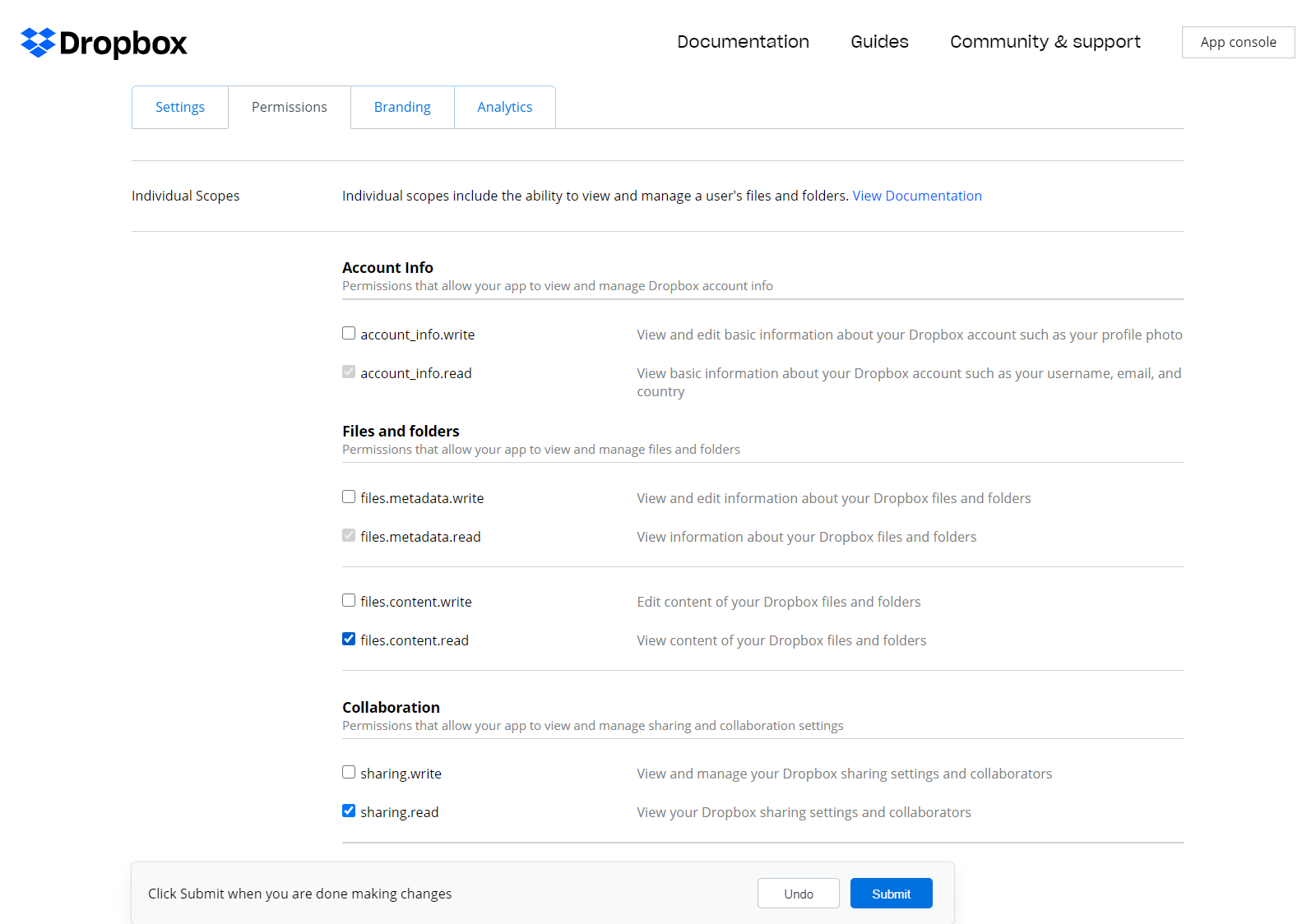 Step 7: (optional) Head over to the Branding section to add more information about what your Dropbox app does. This defines how the app is presented to the users in the authentication screen. 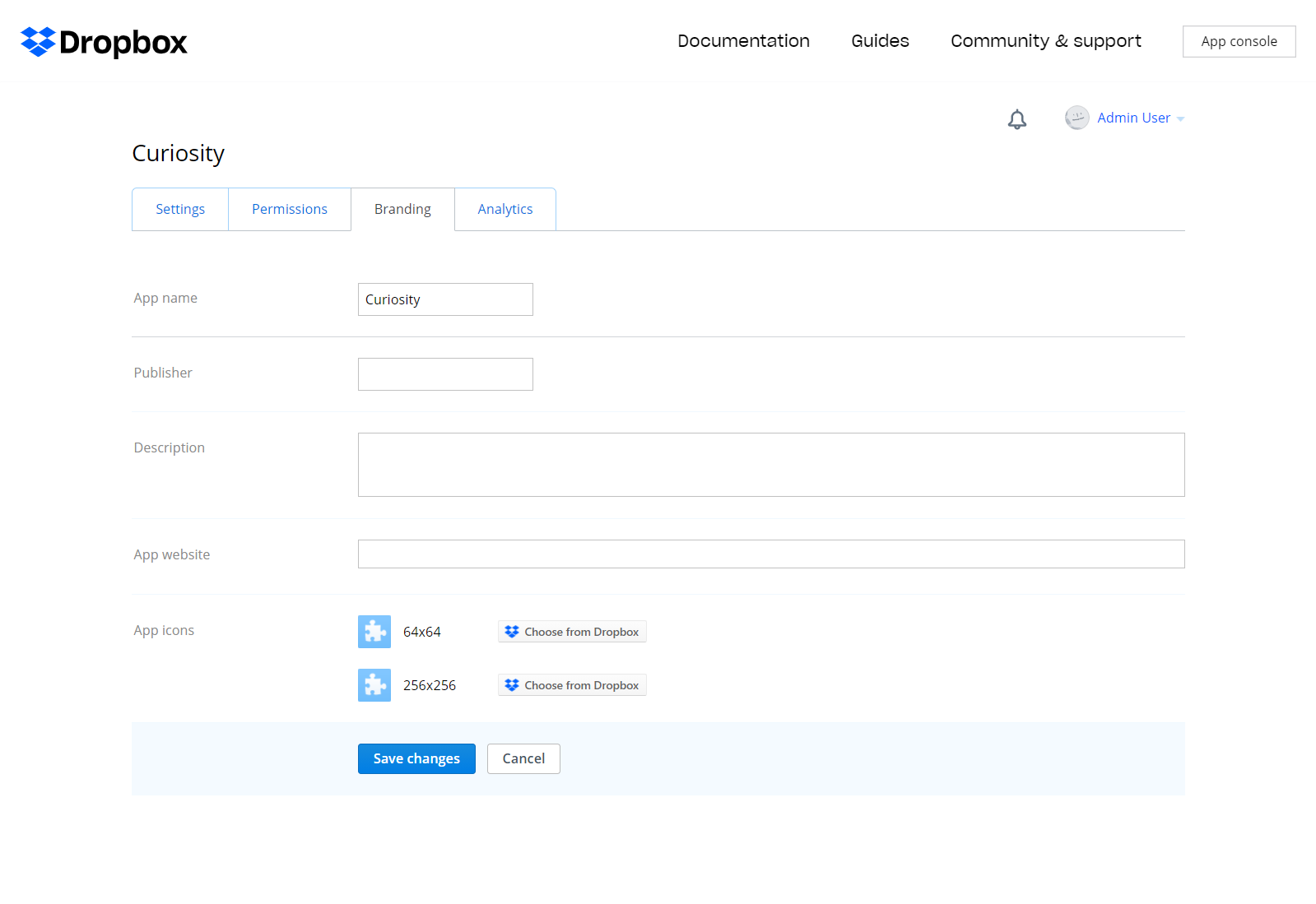 Step 8: Head back to Settings and retrieve the App key and App secret to authorize Curiosity with Dropbox. 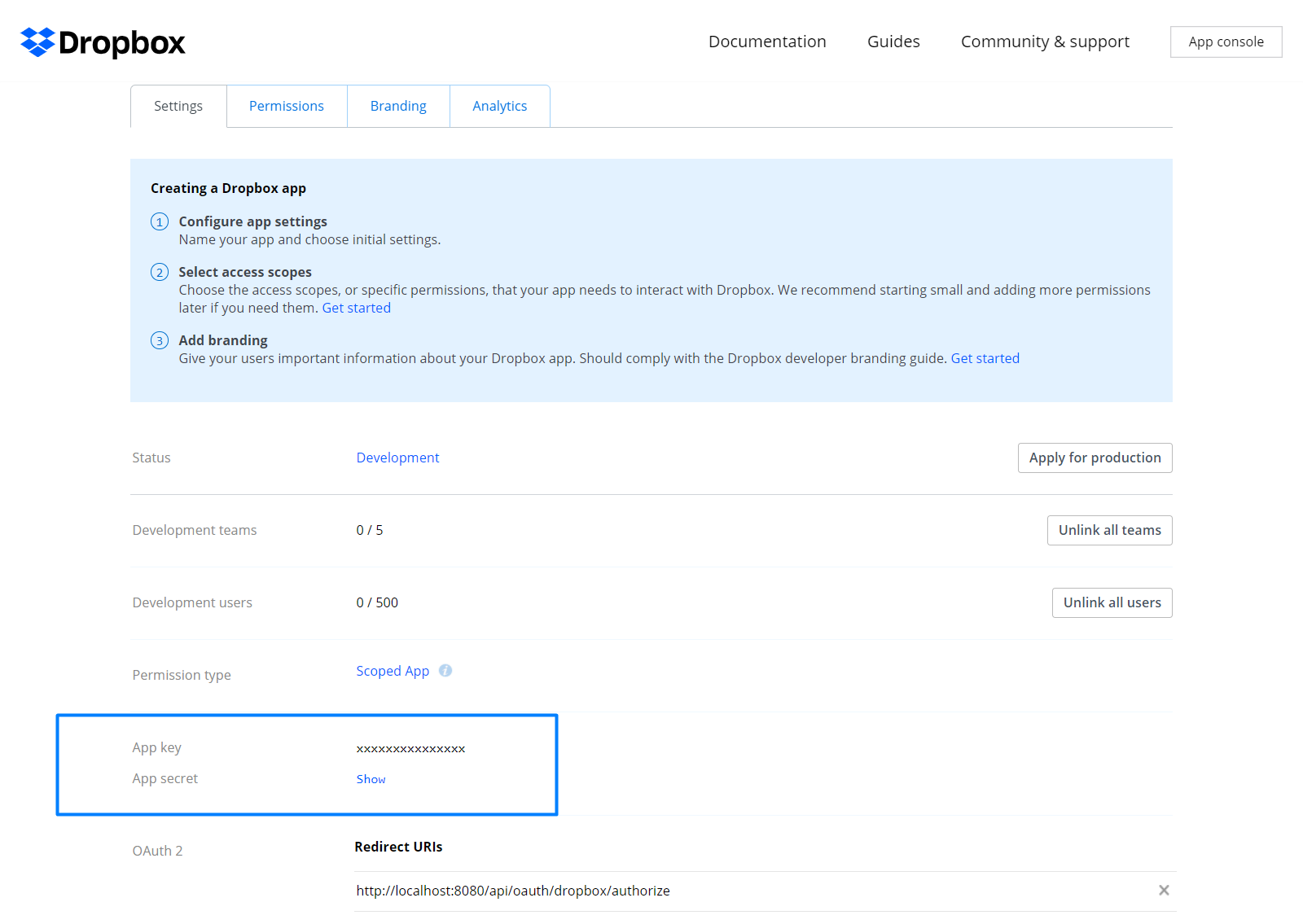 Configure the Dropbox Connector in Curiosity

Step 1: Navigate to the Data Sources Hub and select the configuration interface for Dropbox. 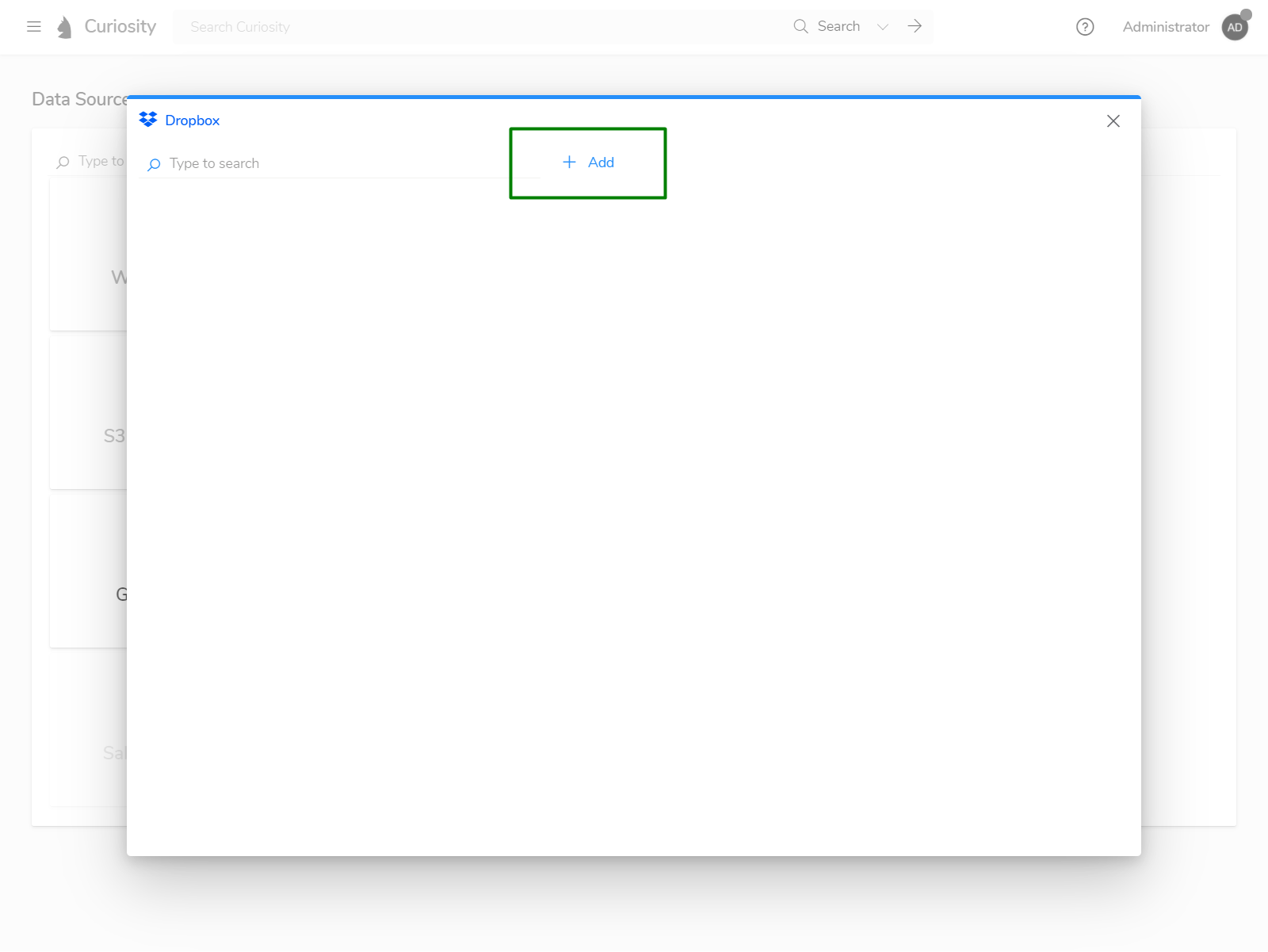 Step 3: Provide the access keys to your Dropbox app to allow users to authenticate themselves: 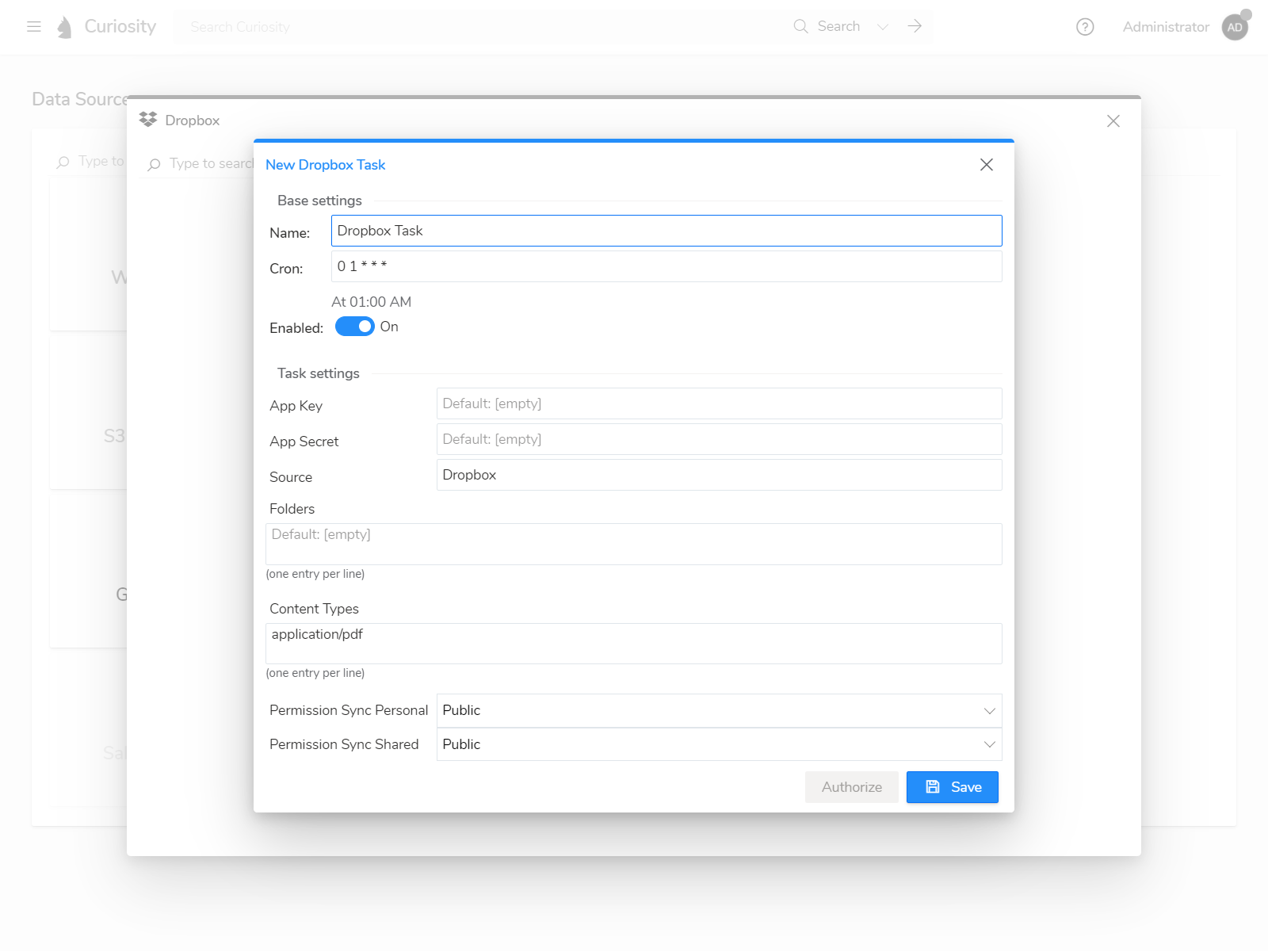 Step 4: Modify the configuration on how the connector behaves.

Step 5: Press Save to save the configuration. 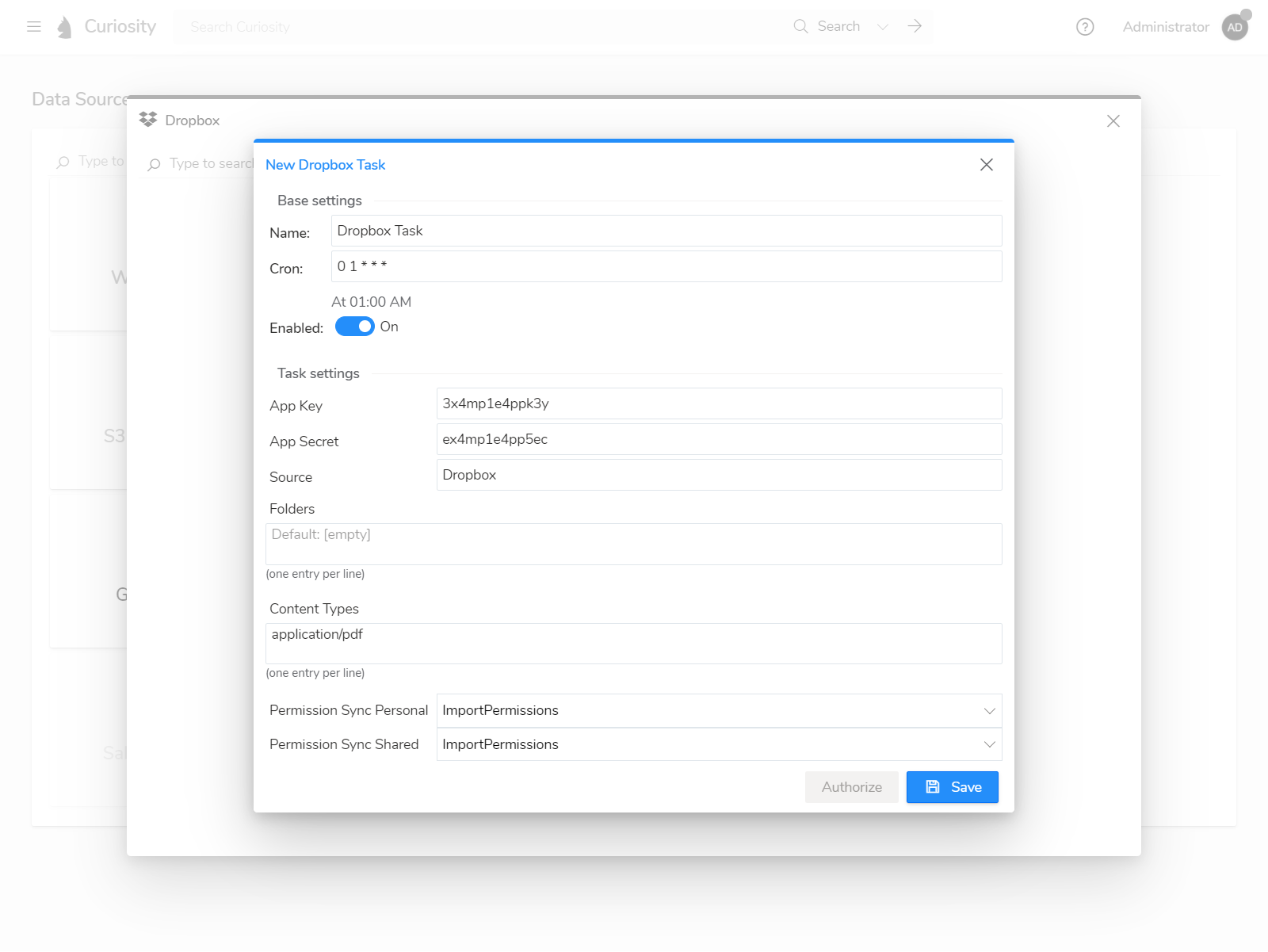 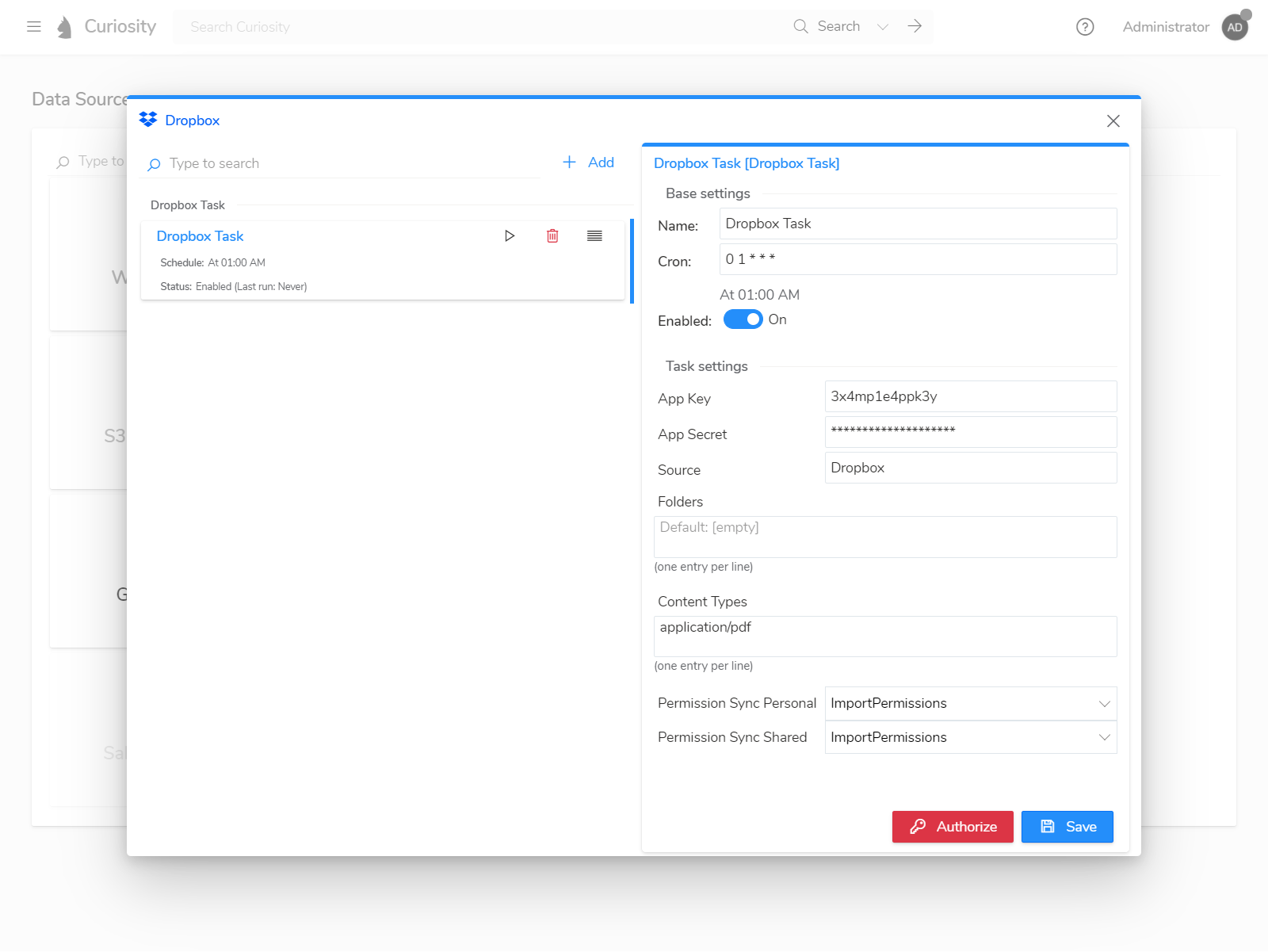 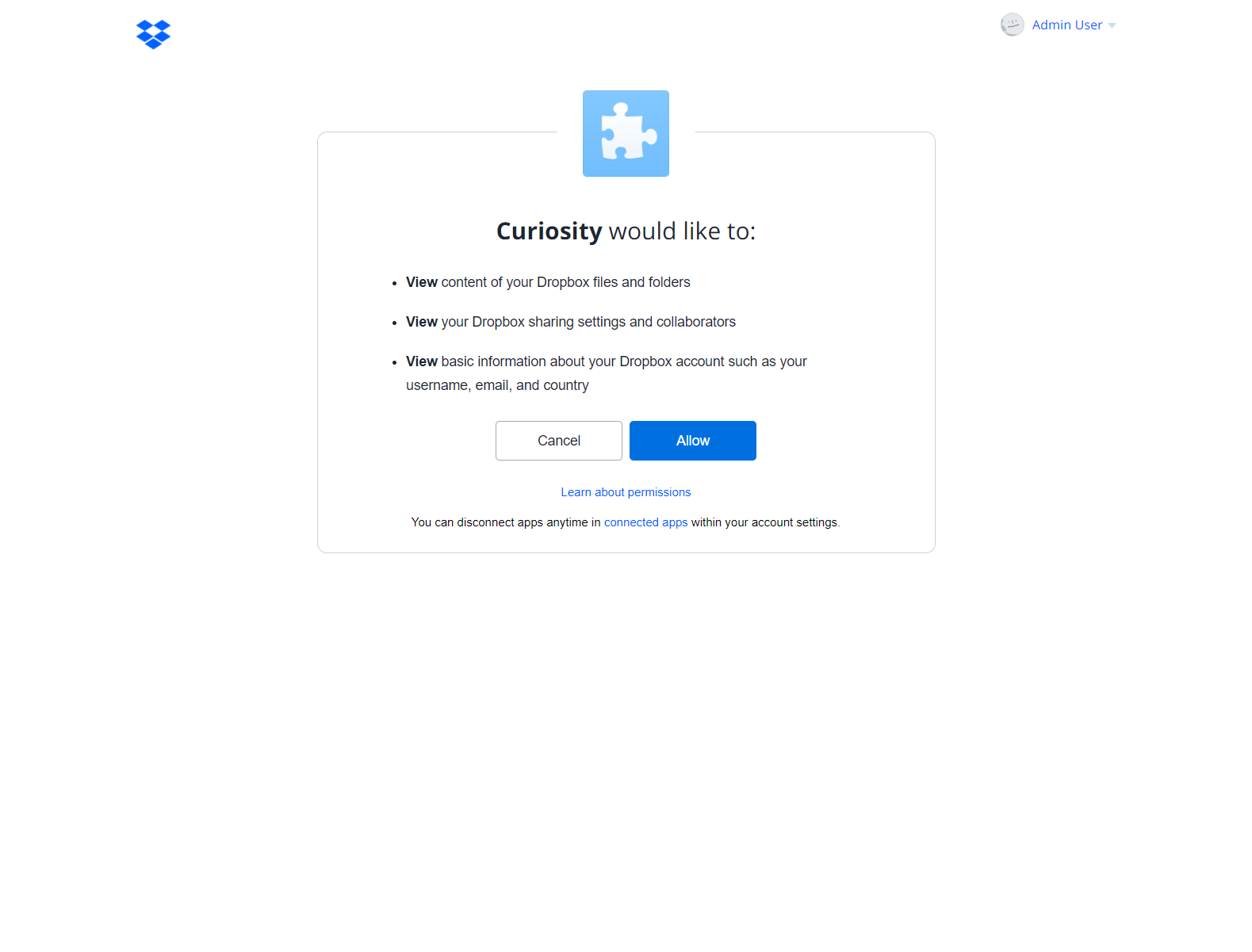 Step 8: You will then be redirected to the Data Sources Hub where you can see a configured Dropbox connector. 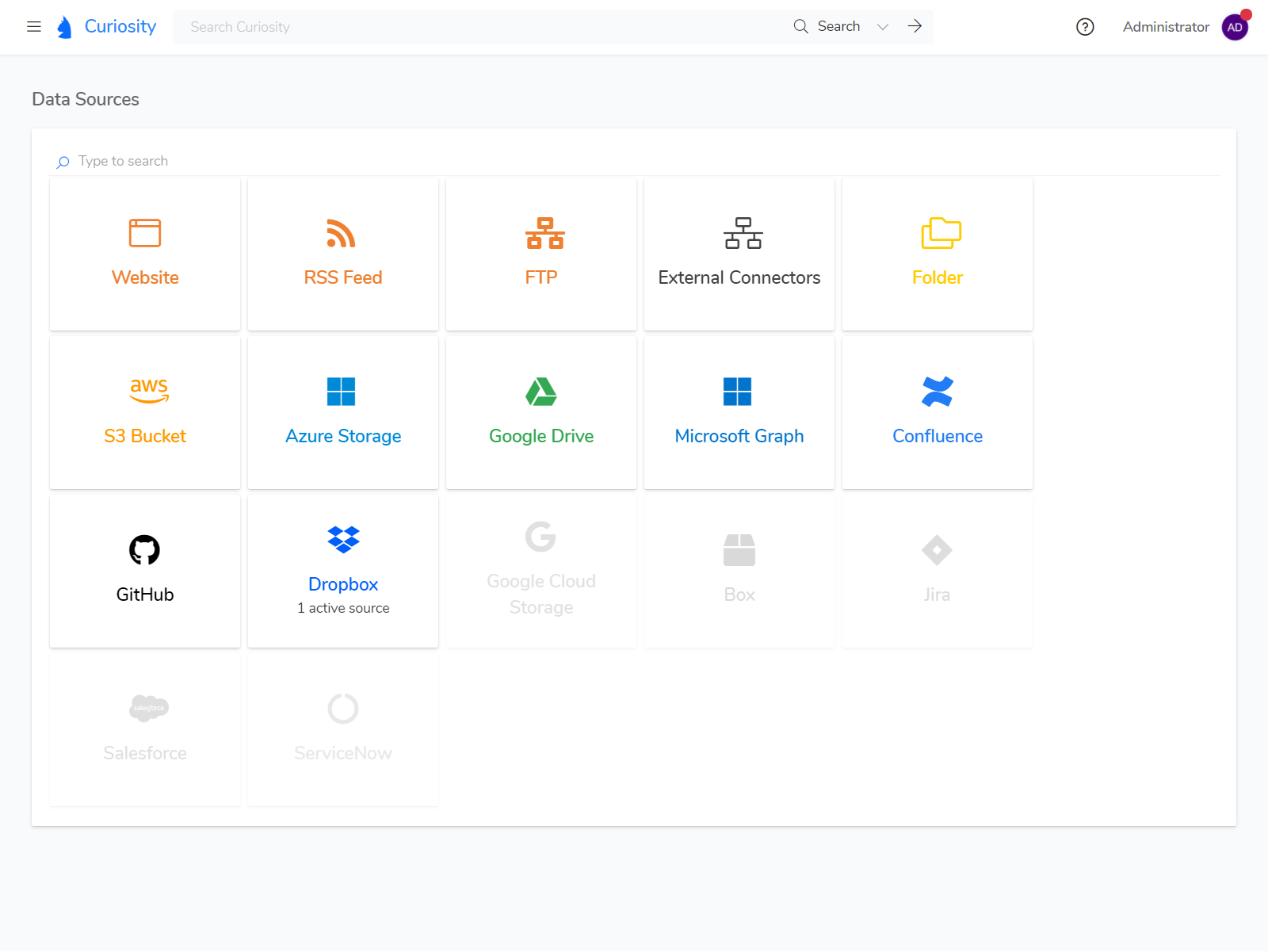 Step 10:Run the Dropbox connector for the first time by pressing the Run Once button. This will do an initial import of files and folders. Following runs of the data connector will only import changes to the authenticated Dropbox. 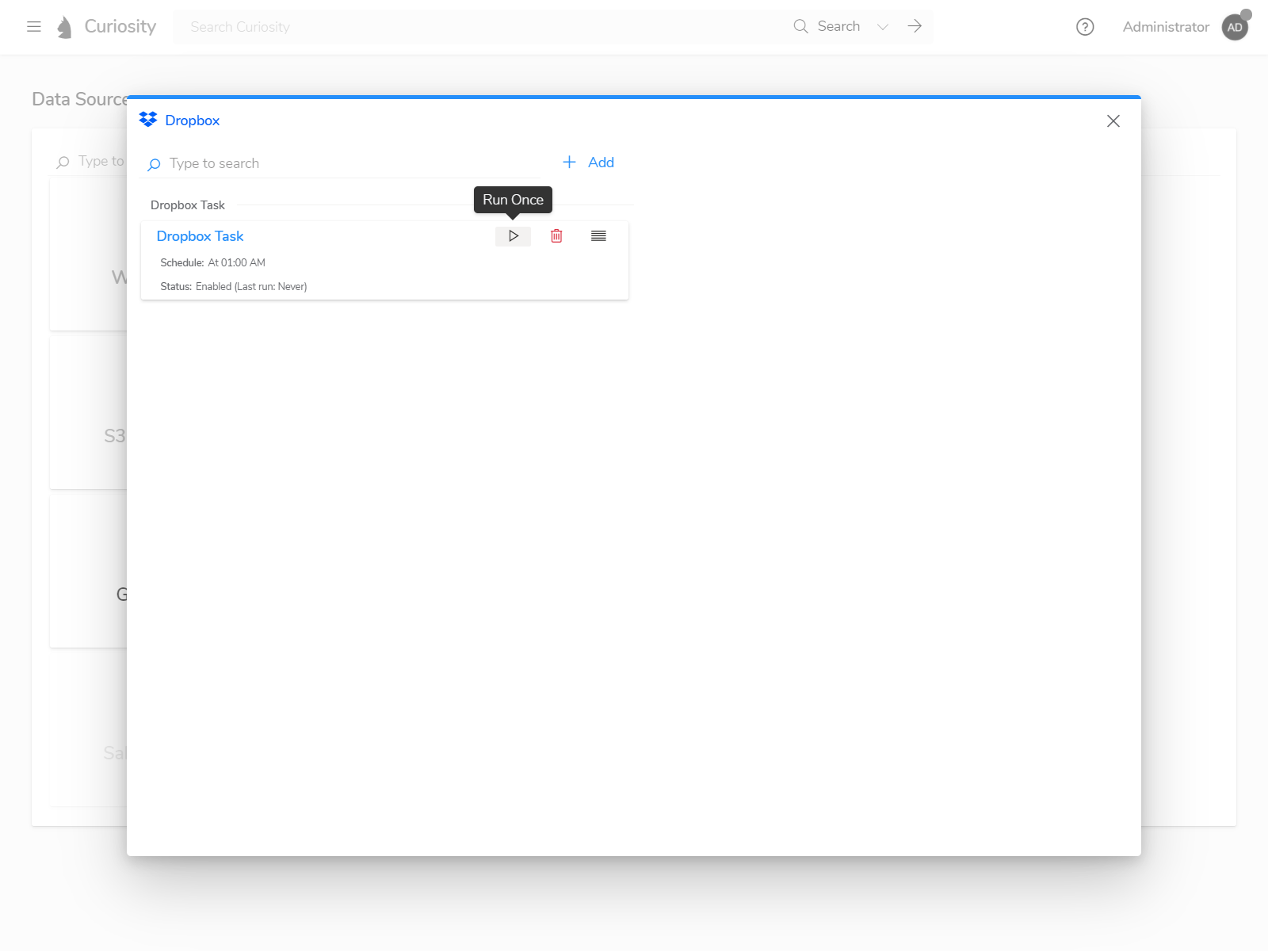 Step 11: The status of the current run of the connector can be seen by clicking the logs button. 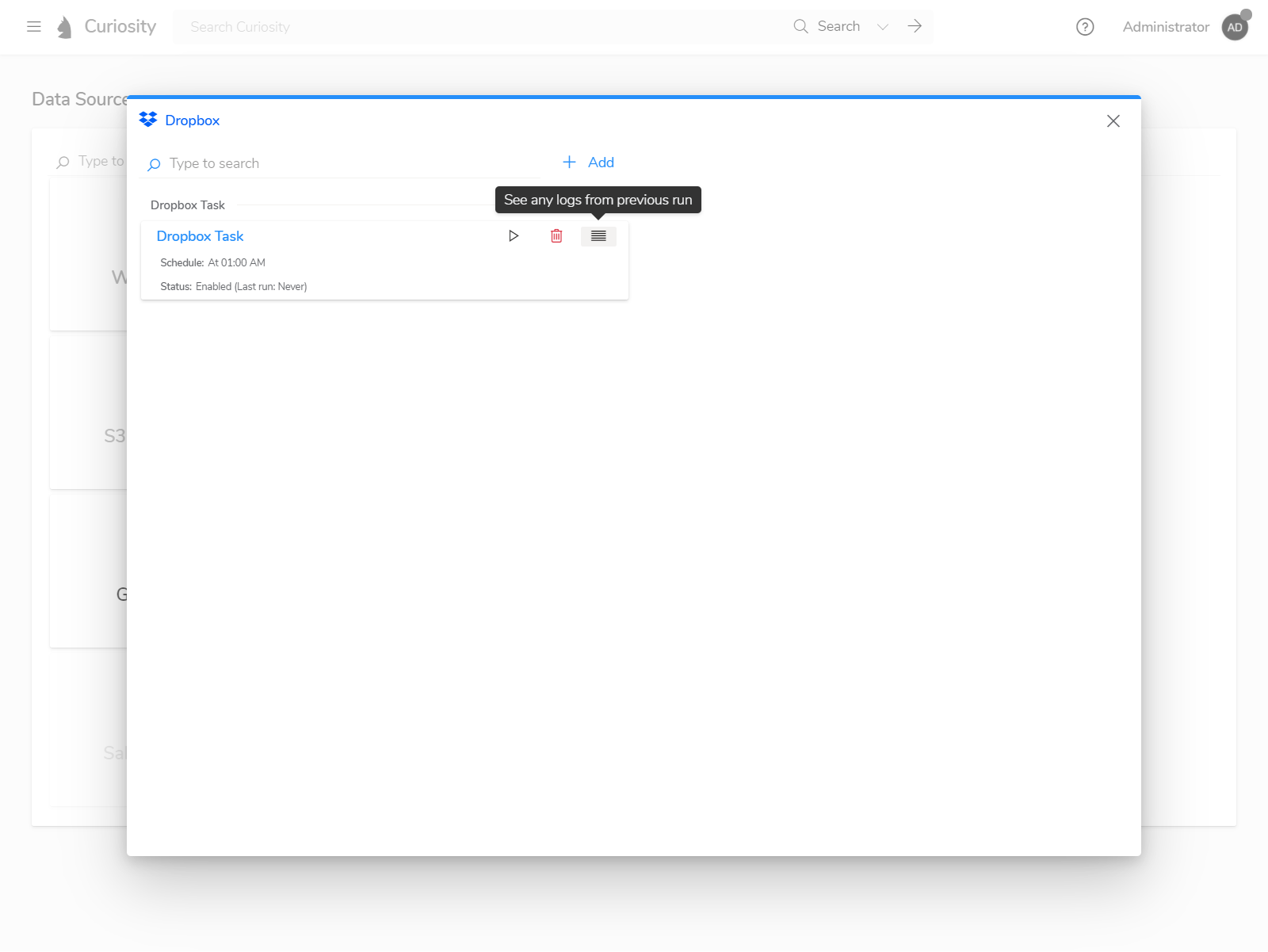